Instagram will test hiding the like count from photos, and view counts from videos, in an effort to get users to pay attention to the content itself and not their associated engagement metrics, the Facebook-owned app announced Tuesday.

In the test, followers won’t see total likes on photos, or views counts on videos, in their Instagram feeds or when visiting a user’s profile. The account owner will still be able to access their own metrics and see the total likes or view counts for a specific post, although they will need to tap through a post to view those metrics. Instagram said that the “private likes” test would begin later this week for users in Canada at F8, Facebook’s annual developer’s conference.

Critics of social media companies have said that the public emphasis of such metrics as likes incentivizes negative behavior on platforms including Facebook, Twitter, and Instagram, leading users to chase engagement to measure their self-worth. Many social media companies use algorithms that take into account a post’s likes or view counts, among other metrics, to determine how to distribute that content to other users.

Head of Instagram Adam Mosseri told BuzzFeed News that the test wasn’t about incentivizing specific behavior but “about creating a less pressurized environment where people feel comfortable expressing themselves” and focus less on like counts. “We do hear people worry about how many like counts they get,” he said.

Likes can also be an inaccurate way of measuring genuine engagement from users. Mosseri said he wasn’t taking the full removal of like counts or video views “off the table” in the future and noted that he was hoping to learn from this first test.

He also said he would have to think about hiding metrics in stories, one of Instagram’s most popular features, in the future. Stories — ephemeral photos and videos that are broadcast to a user’s followers or certain groups — allow a post’s author to see how many people viewed that post. (It does not display story view counts to followers.)

In January 2018, in response to mounting criticism that technology platforms do more harm than good, Facebook CEO Mark Zuckerberg said the company would start focusing on “time well spent,” a phrase Zuckerberg defined as “a responsibility to make sure our services aren’t just fun to use, but also good for people’s well-being.” It’s unclear whether removing likes on Instagram will actually make people feel less horrible about the popularity of their posts, or if they’ll just switch their focus to other forms of validation on the platform. 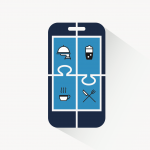 Try to think back, in a time where phones were connected by chords, and the internet used the same phone line as your house phone.

The Importance of In-App Messaging

In-app messaging is exactly what it sounds like: an easy way to communicate with users